About The Missouri Wolverines

About The Missouri Wolverines

The Missouri Wolverines Youth Football Club offers tackle youth football and flag youth football for both boy and girl  athletes between the ages of 5 thru 14 years old who reside from anywhere in Kansas City Missouri Metro Area.

ATHLETES WITH COURAGE
Missouri Wolverines Youth Football was established to develop young athlete's skills both on and off the field to prepare them for high school, college, and life. Athletes With Courage is our mindset with our players. We stress to our players there is more to being a football player than just their size. We strive to change the mindset and reputation that football players are not bullies. On the field, we expect an aggressive athlete, giving their best effort 100% of the time. However, off the field, we expect our players to lead by example, be good students, good to their families, and no bullying. We ask our players to have the courage to represent our organization with pride and be good citizens.


COMMITMENT means “buy-in”. Our coaches and players have their team and teammates best interest at heart. Coaches and players are committed to attendance of practices or games. Don't be late. Communicate often so coaches can be prepared for practices and games. Players learn to accept feedback to get better. Commitment means that the goals of the team are more important than the goals of any individual player. Everyone knows there is no "I" in "TEAM". Commitment is pushing yourself every practice and every game to improve individual skills and abilities and be a contributor to the team's overall success.

LOYALTY is allegiance. Football is a sacrifice of your time and working through the highs and lows of what a practice, a game, or a season can bring. There is only one winner in a game and one champion in a season. If you stay loyal to your team, you will develop a sense of Pride knowing you are belong and are a part of something great. Loyal because player see that they are learning skill above and beyond football. Loyal because this is a family. We our players to always be loyal to themselves and make good decisions for the benefit of their team and organization.

DESIRE is wishing for something.  We inspire DESIRE in players by pushing them to be the best that they can be. We educate players on what football life beyond middle school so they have the DESIRE to play and are ready for the high school and college level. Never stop striving for the top because you are the only one that can keep you from reaching your goals.

Football is a team sport. Eleven individuals must coordinate together as a team in order to succeed. The failure of one individual impacts the whole team. Playing sports, at a young age, develops muscle tone body control. It encourages taking care of your body and making healthy choices to increase performance. It improves self-confidence. Our practices are hard, but fun. Being in shape is key to prevent injury, so players need to expect to be conditioned. Conditioning is also key so players are prepared to absorb and deliver contact on the field. A conditioned athlete is a healthier athlete.

Missouri Wolverines Football play teams throughout the Kansas City Metro to expose our players to some of the best teams around, on every grade level, as well as participating in both pre-season and post-season tournaments. The Missouri Wolverines Youth Football Club consists of tackle and flag football teams: 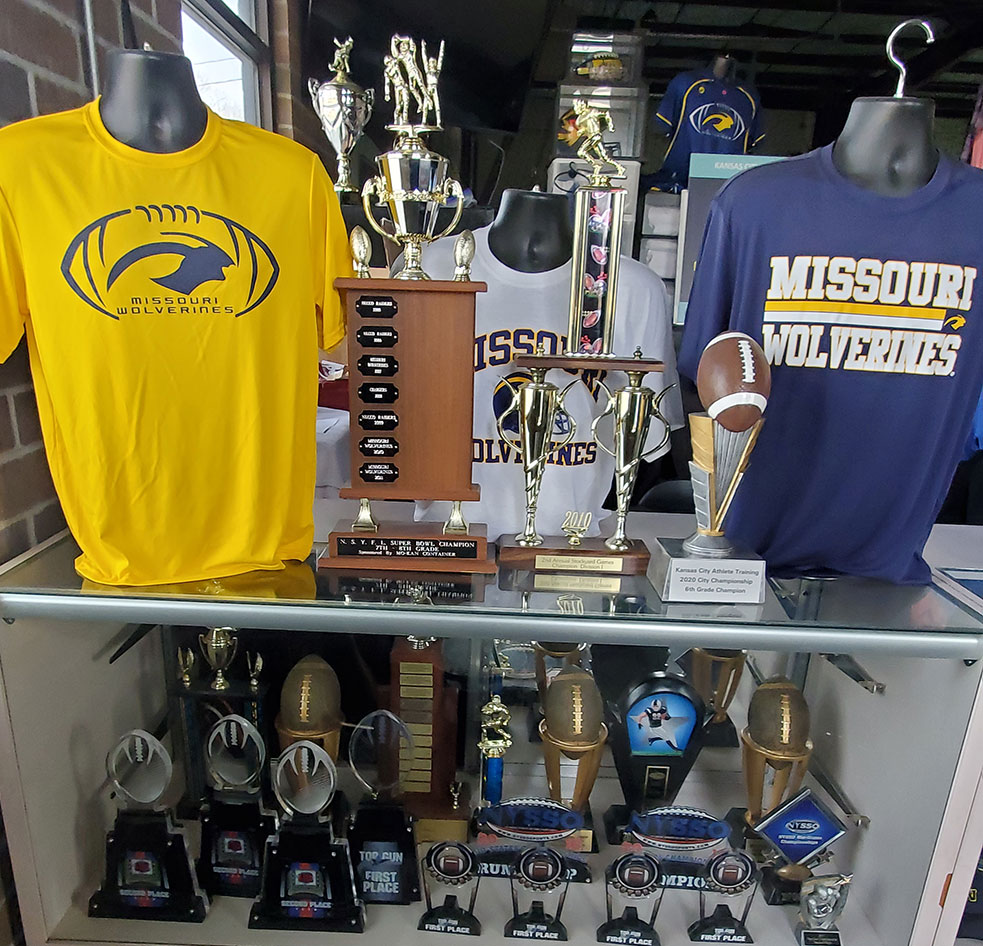 Many parents have valid concerns about their child playing tackle football. The concussion media attention over the last several years has hurt and helped the youth tackle football programs. The fear of concussions has deterred or delayed players from signing up for fear of the unexpected.  We say unexpected because, at the youth level, is it possible? Of course. Does it happen often in a season? No. How has the media attention helped the sport of football as a whole? Improved training and equipment. We are smarter today than we were 10-40 years ago. The rules around concussion protocol has evolved to error on the side of caution. Coaches and trainers and doctors are better trained than ever before. Football is a contact sport, whether it is flag football or tackle football. There is risk in every sport you play. The Missouri Wolverines have experienced coaches that have played at the collegiate level and have been trained on the proper techniques to keep players safe. Again, injuries can happen, but the benefits of playing football far outweigh the negative publicity it has received, especially with youth football. Our coaches are certified by USA Football.

Each grade level is staffed with at least one coach who played at the college level. Why is that important? Our players are taught the best and safest way to play the game along with the newest techniques being used at the highest levels.

Football is not all X's and O's. Each coach is USA Football certified. Background checks are required to ensure we have quality people worthy of being a role model for our players. Our coaches are volunteers looking to give back to their community and care about kids prospering on and off the field. They have a passion for working with kids and sharing their experience to learn to love the sport of football.

Are you interested in becoming a coach? - Read More

Contact the Missouri Wolverines as we are happy to answer any questions you may have.

We want to thank you for your interest in the Missouri Wolverines.

Off-Season Football Training
At Kansas City Athlete Training located in Kansas City Missouri, experienced as well as beginner football players can work on improving during the offseason by attending one or several Football Specific Training Classes to improve their techniques as well as get in shape by attending Speed and Agility Sports Performance Training including Middle School Weightlifting. The Missouri Wolverines Youth Football Club highly recommends all current, new and/or interested football players looking to join the Missouri Wolverines to attend classes leading up to the fall season. Kansas City Athlete Training has provided training for all sports via speed and agility classes and weightlifting classes plus football training for every position on the field including 1-on-1 personal training since 2005.