2020 was the year of Covid and yet managing a pandemic and the safety of our players, the Missouri Wolverines were able to provide a safe, fun environment for kids to learn and get better at the game of football. Despite all the obstacles of shutdowns and cautions around the KC Metro, the Missouri Wolverines were able to play over 70 games as an organization and provide playing opportunities for players from St. Joe to Olathe on the Kansas side and then from as far as Higginsville, Blue Springs and Kearney on the Missouri side. We prepare the youth of Kansas City for high school and in 2020 we expand are reach to have now placed kids in over 40 different high schools throughout the KC Metro 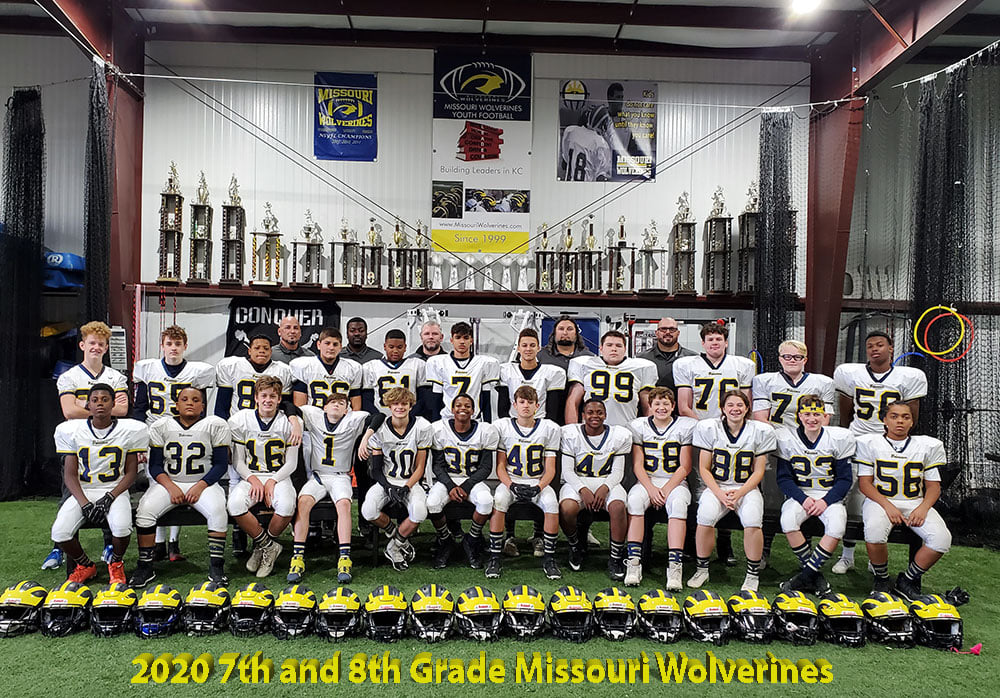 Our middle school team which is made up of 7th and 8th Graders from all across the Kansas City Metro had a successful year with all things included having to overcome injuries to several key players and were able to manage a very good regular season record beating teams from Omaha Nebraska and Springfield Missouri. 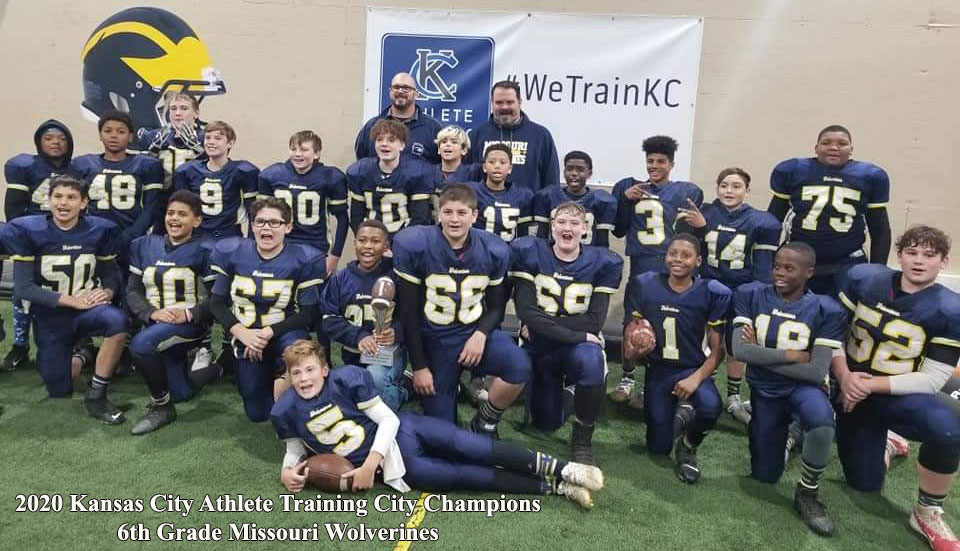 Our 6th Grade team finished with our best overall record and was probably our best team on the year, the team started off the year making it to the championship of the Savannah Gridiron Classic Tournament before falling to a team from Omaha Nebraska however quickly bounced back and did not lose another 6th Grade game in the months of September, October and November beating teams from all over the KC Metro. The 6th Grade ended the season playing the first ever Kansas City Athlete Training Championship Game facing the 12-1 King Huskies, after falling behind early the 6th Grade rattled off 31 unanswered points to capture their first ever City Championship 31-6. After going 1-6 in the preseason the 6th Grade finished 10-7 on the year with a 9-0 run. 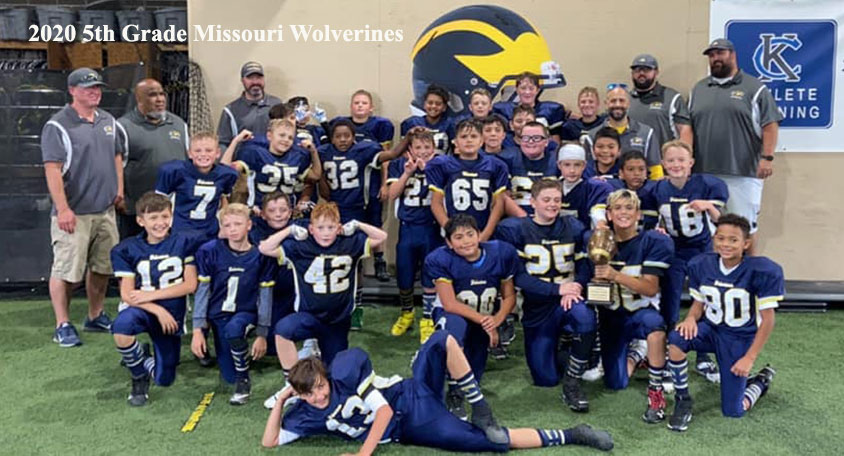 Our 5th Grade saw one of the largest turnouts in our organizations history with over 30 kids playing for the 5th Grade however several players were first year kids and some had very little playing experience. Early on the team took had to overcome new players at several position however in October they were able to overcome and preseason loss by winning the 2020 Organizational Challenge over the Dark Knights. The 5th Grade was able to travel to Springfield to play in the Queens City Tournament and played teams throughout the KC Metro and ended up with

Our 4th Grade squad was a combination of 4th, 3rd and even one 2nd Grader. The team had to play all 4th Grade teams the entire year but managed to finish with a 4-4 record on the way to winning the NYSSO Mid-States Challenge in Lawrence Kansas. Huge improvements throughout the year for this squad.

Our Flag Program had two teams this year. Flag Blue which was mostly all 2nd Graders and Flag White which was had Kindergarten and 1st Graders on it. Flag Blue only lost one game the entire year and played outstanding going 7-1 on the year. Our Flag White team improved throughout the year finishing 3-4 but making HUGE strides every week.

2018 was a fantastic year for the entire Missouri Wolverines Football Club as all of our teams saw improvement and finished the year better than we started. We ended up going 40-20 as an organization with 3 Tournament Champions, 3 2nd Place finishes and 1 League Champion.

Our 8th Grade team which had 7th Graders on it this past year went 11-7 overall finishing as the number two team in the KC Metro while playing teams from 5 different states and several top teams around the midwest including the East St. Louis Jr Flyers, South Dakota Miners, Omaha Patriots, St. Joe Thunder, Rebels from KC, Marshaltown Iowa, Wichita Grizzles, Wichita Gators, Topeka Crush and finish 2nd in the Gateway Classic in St. Louis in early August then in post-season won the NYSSO Mid-States Championship Tournament beating two Wichita Teams then finished 2nd at the NYSSO Top Gun Tournament losing 12-08 in the Championship against the top team in the area.

Our 6th Grade team saw improvement the entire season as well. They started off playing in a preseason tournament in Basehor where they lost both games however rebounded to win 5 straight games in the regular season and then finished 2nd in the NYSSO Mid-States Tournament in Lawrence Kansas. One of the highlights on the season was having the chance to play the KC Metro League's undefeated 1st Place team the Della Lamb Saints in North Kansas City in a matchup game which saw the Missouri Wolverines winning in OverTime.

Our 5th Grade had a fantastic season as they finished 3rd in the city after going 9-3 on the year. They started the season off winning the NYSSO Kick-Off Classic in Basehor Kansas then only losing one game in September and October. In the post season they played in two tournaments taking 3rd Place in the NYSSO Mid-States Tournament and then placing 2nd in the NYSSO Top Gun Tournament.  A great season for the 5th Grade.

Our 4th Grade squad was a combination of 4th, 3rd and even one 2nd Grader. The team had to play all 4th Grade teams the entire year but managed to finish with a 4-4 record on the way to winning the NYSSO Mid-States Challenge in Lawrence Kansas. Huge improvements throughout the year for this squad.

Our Flag Program had two teams this year. Flag Blue which was mostly all 2nd Graders and Flag White which was had Kindergarten and 1st Graders on it. Flag Blue only lost one game the entire year and played outstanding going 7-1 on the year. Our Flag White team improved throughout the year finishing 3-4 but making HUGE strides every week.

4th Grade: 2 teams but no stats

Flag: 2 teams competiting in the Champions League (Blue and White)

The Missouri Wolverines expand and break away from the NSYFL and separate into individual grade based teams. We also entered into an agreement with the North Kansas City School District to utilize the facilities at Winnetonka High School for both practices and games.

Our 8th Grade team became the first ever Missouri Wolverines team to travel out of the KC Metro area and play on a National Level competing in the AYF National Championship and placing 3rd in the country.