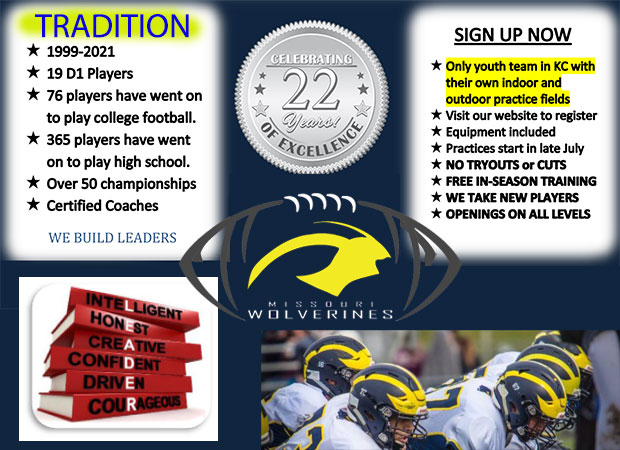 Read some of our Parent Testimonials about the Missouri Wolverines Youth Football Club in Kansas City Missouri. Our goal is to prepare athletes on the youth level for high school while developing strong relationships with our parents and players resulting in a large portion of our organization is through current and past parent recommendations. Below are a few of our Parent Testimonials. If you would like to leave us a review, please click here.

Some of the best coaches in the city.

As someone who was blessed to experience both high school and collegiate sports, I can testify that the Missouri Wolverines are the best youth sports organization in Kansas City in regard to preparing these young men for the next level in competition and in life.
If you're looking for a program that coaches the fundamentals of the game correctly, look no further. If you want your young athlete to experience elite-level training and competition, the Wolverines are your team.
One of the best parts of the organization is the camaraderie with the parents. We feel extremely blessed to be apart of the Missouri Wolverine family.

One of the BEST Youth Football Organizations and Training Programs around!

This is a GREAT organization. My son played for MW for 7 years. He wasn't a "star" player but the coaches still took the time to teach him the game. He learned so much from the coaches and organizational leaders that went far beyond football, high school and college. He was taught to work hard, never give up, be there for the team EVERY practice, EVERY day, EVERY game. Today he has an excellent work ethic and I know MW had a hand in it! This organization has grown since then but still has the same core values.

Best youth organization in the KC Metro area where all kids are welcome, quality coaches who care about your kids, quality program, and the best training around at their facility @ KC Athlete Training!! Thank you Coach Tuso!!

An exceptional organization with highly qualified and caring coaches.

My son played for the Missouri Wolverines and the program was absolutely phenomenal!! The coaching staff were top notch and my son learned so many valuable lessons on and off the field. Furthermore, he developed friendships from around the entire city. He plays high school football now and is often reunited with previous teammates and even a few coaches on the other side of the ball. This entire organization is AHHHHHMAZING and brings the definition of family to a higher level!!! I applaud and cannot thank the Missouri Wolverines enough for all the organization did for my son and family.

The best group of coaches around. The detail and the care they have for your child to be a better person and leader on the field and a leader off of the field is incredible. Couldn't be more pleased with our decision to move teams.

I am forever grateful for the opportunity I had to play with this amazing organization. So many valuable life skills I learned on top of football knowledge. Way to go Coach! Can't wait for the season and to be able to watch a game!


Susan Barreca
Supporter and Fan of the Missouri Wolverines

Missouri Wolverines Youth group is a fantastic organization with a truly special staff and a group of volunteers. They make such a difference with the youth that participates on so many levels, both in the long-term and on a daily basis. The children that they coach learn everything from: “play, competition, cooperation, service and just being kids.”

This is an organization that develops the talent of the children for the future in: school sports, through leadership development on the field and off, they know what it takes to improve the youth that they serve, and the coaches and volunteers show up every day to bring about that task with enthusiasm, perseverance and positivity.

I am very very proud of the Missouri Wolverines Youth Group. My son, Anthony Barreca, has been coaching and dually involved with this group for over 15+ years. I have seen first-hand the development of the children, the respect they are taught, and the community involvement for which they are well known. Keep up the marvelous work, and hope 2017 is a grand year for you all.

This is a seasoned organization boasting 18 yrs and counting! Playing for the wolverines is the complete football experience. The standards are high and the results are proven on and off of the field. #22gameslastseason

Success isn't measured by wins and losses. It's measured by growth, confidence, attitude, team-work, discipline, perseverance, & determination. In my 4 years with this youth organization I've experienced and witnessed these great attritubutes from the top to the bottom. Success isn't measured only on a football field but also in the classroom and life. These are the things we strive to help teach our young men with the Missouri Wolverines Org. We are all coaches and parents in this game of life and we all work together for the success of our youth.

I have been coaching for the Missouri Wolverines for 15 years now. I have seen what the organization has been able to do for young men and women. This organization and its leaders will help shape the youth to become better athletes on and off the field. We have more athletes that go on to play varsity sports in high school. We have more athletes go on from high school and play at the college level. You look around the Midwest and ask about the Missouri Wolverines and people will say it is the best youth organization around.

Sounds like my kind of organization because the people within that organization make sure they knew what they were doing. In little league coaches loose football games I always say. The days of getting off the sofa and coaching rec football have been gone for nearly 20 years now. If your rec ball programs are not reaching out to the local high schools and attending football clinics in the off season you should not put your kid in that program. USA Football has been certifying coaches for over a decade now you would not send your kid to a school where the teachers are not certified to teach? A coach any coach is a teacher.

Missouri Wolverines is one of the best Youth Football Leagues we ever been involved with.
My 2nd grader played for a club in southern Overland Park, KS. He loves football and was a natural.
We played the Wolverines the last game of the season. The drive could be made in 35 minutes from where we lived. Stilwell, KS to there location a few miles north of Worlds of Fun. We lost 46-0. My grandson had several tackles and 2 sacks in a roll against the best 2nd grade team in the city. I got to meet the President of the club Jim Tuso during the game. I told him of my frustration because we went 0-8. He ask what was my kids #. After the game Mr. Tuso grab me and ask if my grandson wanted keep playing in tournaments up until Thanksgiving. That gave us another month of football. We should up Monday under the 2nd grade team for practice and won all 3 Tournaments going 8-0. Ended up going through the worst football season to the best within 30 days.
We where then asked to join the 3rd grade team. My Grandson started both ways. We Won every game in the league. Won 1st place in 3 different Tournament, 3rd place in OK, and the best was winning a National tournament sponsored by Deion Sanders in TX. Deion was a coach on the field for his 3rd grade team. Deion's team only had one 1st down ever ran against them since kindergarten. We scored every time they scored. But we scored every extra point. They didn't score one extra point. Doesn't get any better than that. Botton line we drive 1 hour each way to play with the best. But the club is not just football. They have several parties for the kids in every grade level. It's a family that works hard and plays hard. Give the Missouri Wolverins a call if you want to part of the best tackle football club in KC. You can come from anywhere.