When people go to a Platte County High School football game, they will inevitably see the Pirates’ star quarterback make play after play. They will also see the confident, cool way he leads his team. Then, of course, they will hear his last name. And without fail, someone will walk up to the quarterback after the game, most likely a Platte County victory, and ask him the question he’s answered a million times already … Hey Krae, are you related to Jeff or Bill Kelso?”I hear it all the time,” says Krae Kelso, a 6-foot-1, 185-pound senior. “They’ll always ask me about Jeff and my dad. I get it at least once a game.”Krae is OK with this. He’s proud of his family’s athletic lineage. Jeff Kelso — Krae’s half-brother — was a star quarterback himself. He won the first ever Simone Award (given by coaches to the top big-class high school football player in the Kansas City area) in 1983, his senior year at Park Hill. And Bill — the father to both Krae and Jeff — was a star athlete at North Kansas City High School in the mid-to-late 1950s and then spent parts of five seasons in Major League Baseball. He later spent 30 years as a baseball scout before retiring.”He retired,” Krae says, “so he could watch me grow up.”And that’s exactly what Bill did, for as long as he could. As far back as Krae can remember, his father, who coached him in football, baseball and basketball through middle school, never missed one of his games or practices.”There were times where I’d be like, ‘I wish he wasn’t coaching me,’” Krae says. “He never let me slack on anything. He’d be so nice to everyone else, then I’d do something good, and he wouldn’t say anything. He never let me get a big head.”Father and son, however, did become close through sports. “It meant a lot to me that he was always around,” Krae says. “It let me know he wanted to be there.”Bill was such a consistent presence at Krae’s sporting events that the one time he didn’t show up — for a junior-varsity baseball game in May of 2009 — Krae immediately knew something was wrong.”I’d just seen him that morning,” Krae says. “And when he wasn’t there, I probably called him seven or eight times.”Krae eventually called his mom and told her the deal. They later found Bill unresponsive at his home — dead, Krae says, because of natural causes. He was 69.Krae, of course, was crushed. And his life was thrown into more upheaval that summer, when he moved out of the North Kansas City school district to live with his mother in Platte City.Little did Krae know, however, that despite the sad circumstances of the transfer, his name had preceded him.”I knew the name — of course,” says Platte County football coach Bill Utz.Utz installed Kelso as his starting quarterback that season and watched his team go from 4-6 in 2009 to 8-4 in 2010, when Kelso was a finalist for the Fontana Award (awarded to the best small-class player in Kansas City) as a junior.This season, Kelso is making another run at the Fontana. He’s completed 60 percent of his passes for 1,422 yards and 14 touchdowns, and has added 1,015 yards and 16 touchdowns rushing for the Pirates, who enter their game against Savannah tonight with a 7-2 record and a playoff berth already solidified.Winning a state championship is Kelso’s primary goal, but he admits he wants to win the Fontana Award, not only to shut up his Simone-winning half-brother, but also to prove it to the college recruiters. Krae doesn’t have any offers yet, he suspects, because of questions about his arm strength. It serves as proof of something he already knew — that his name alone won’t get you anywhere, even one as notable as his. “Ever since I was young, I’ve heard that the reason I succeeded was because my dad was my coach,” says Kelso, who is hopeful his hard work will pay off. “I’m playing for myself, but I know he’d be proud of me no matter what I do.” 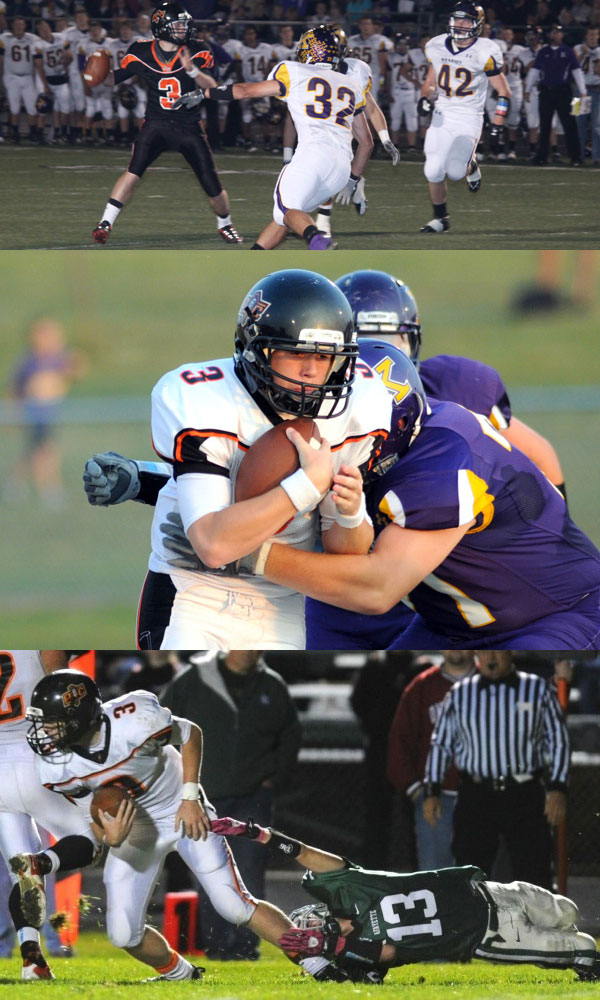